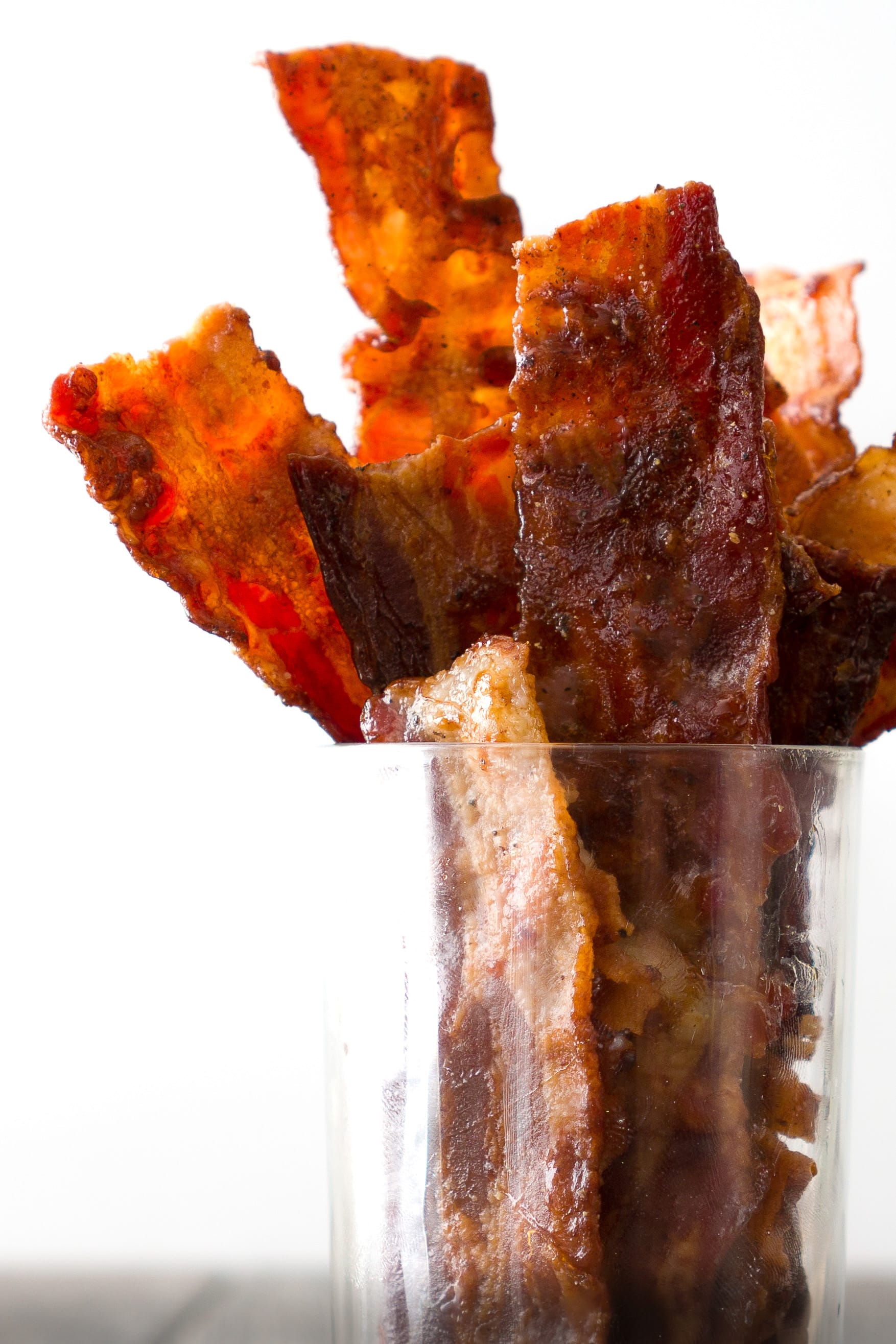 Whatever you call it, this stuff is wickedly good. Using just 1 pan + 4 ingredients, this recipe gets you fabulously crispy, sticky sweet-glazed Coconut Nectar Candied Bacon in under 20 minutes. Not to mention, it's refined sugar free and gluten free.

Ohhhh yeah. Let’s do this. 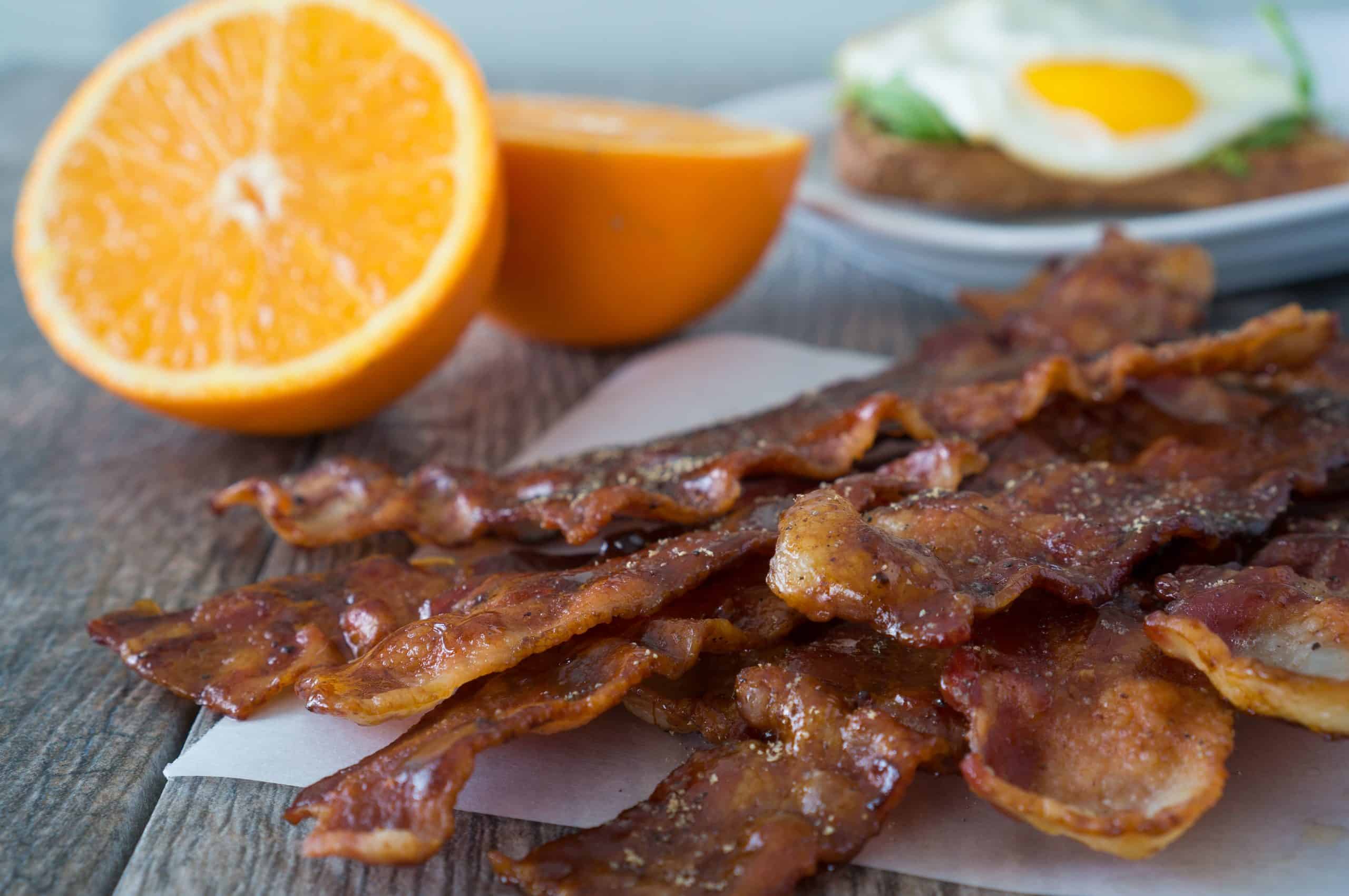 We are keeping things simple with just a bit of coconut nectar, a little kick from freshly cracked black pepper, a pinch of warm cinnamon, and {drum roll}

Because let’s get real, bacon is actually THAT good and you probably don’t need any of my fluffy words to convince you that it’s the best. But I will serve up those words anyway, cause that’s how I roll. Words, food, words, food, and some pictures in between.

Bacon is just one of those wondrous things that is so awesome on its own that it makes all other foods you pair it with insanely better. Putting bacon on something is like throwing a glitter grenade at it. BOOM + SPARKLE. Insta-amazing. 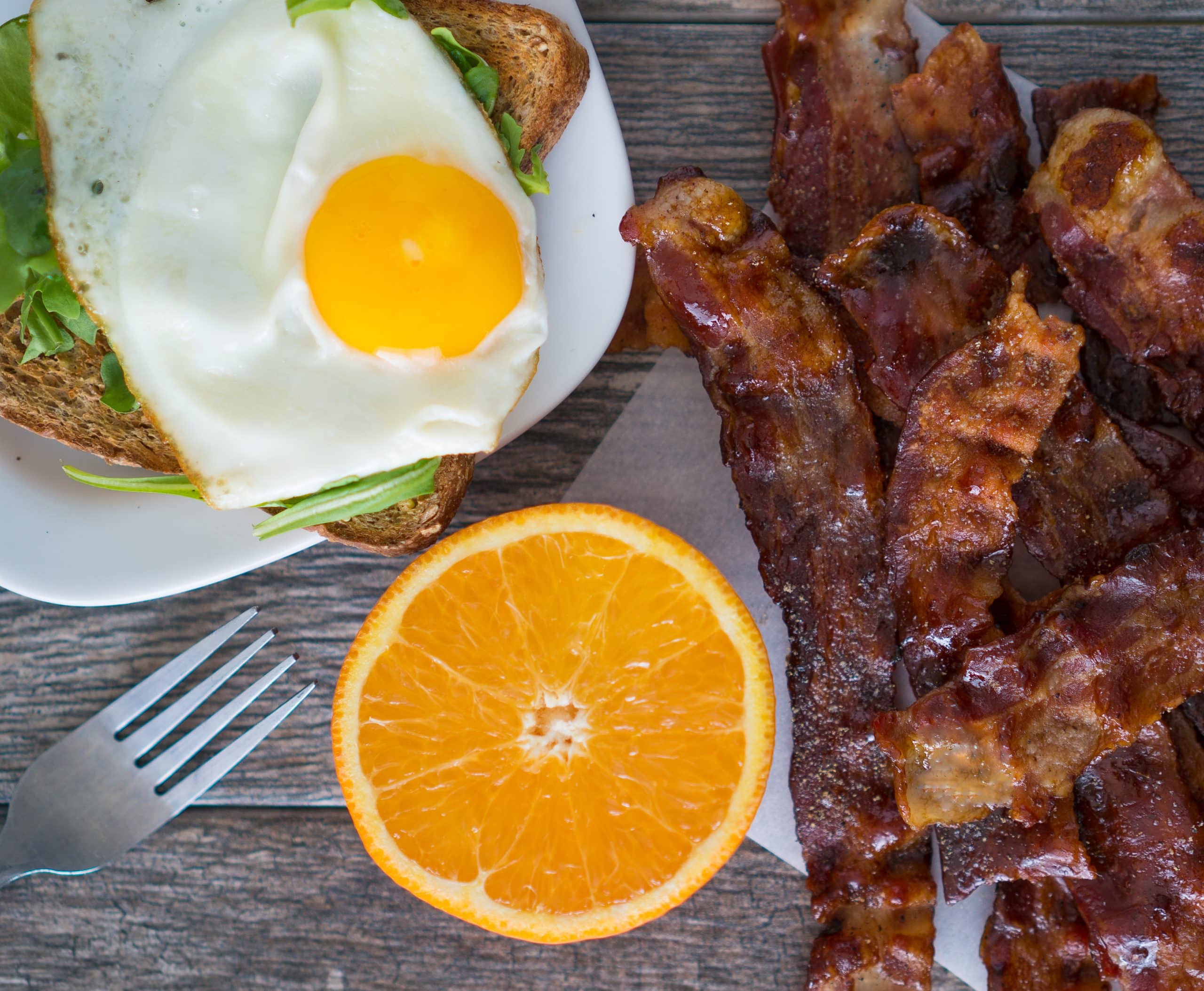 Like burgers. If someone offered you a burger, you might be mildly excited. But if they offered you a BACON cheeseburger?! WHOA, sign me up for one of those.

This weekend we tackled a hike that I thought would be an easy-going, soul-soothing walk in the woods where I could amble around at a leisurely pace. And I would see mountains and trees and waterfalls and rainbows scattered among sweeping views of Yosemite Valley. Birds would be singing and I would be busy snapping my signature crooked angle, blurry, never-as-good-as-real-life, “crap, my thumb is in it again” iPhone pictures. (Thankfully, Billy's photography skills make up for my lack of camera-literacy. He makes sure we don’t go home empty-handed without pictures to share later.)

The hike was absolutely ALL of those things. And more. There were even, mind-blowingly enough, actually rainbows inside of waterfalls.

But let me tell you. That hike was anything BUT easy. 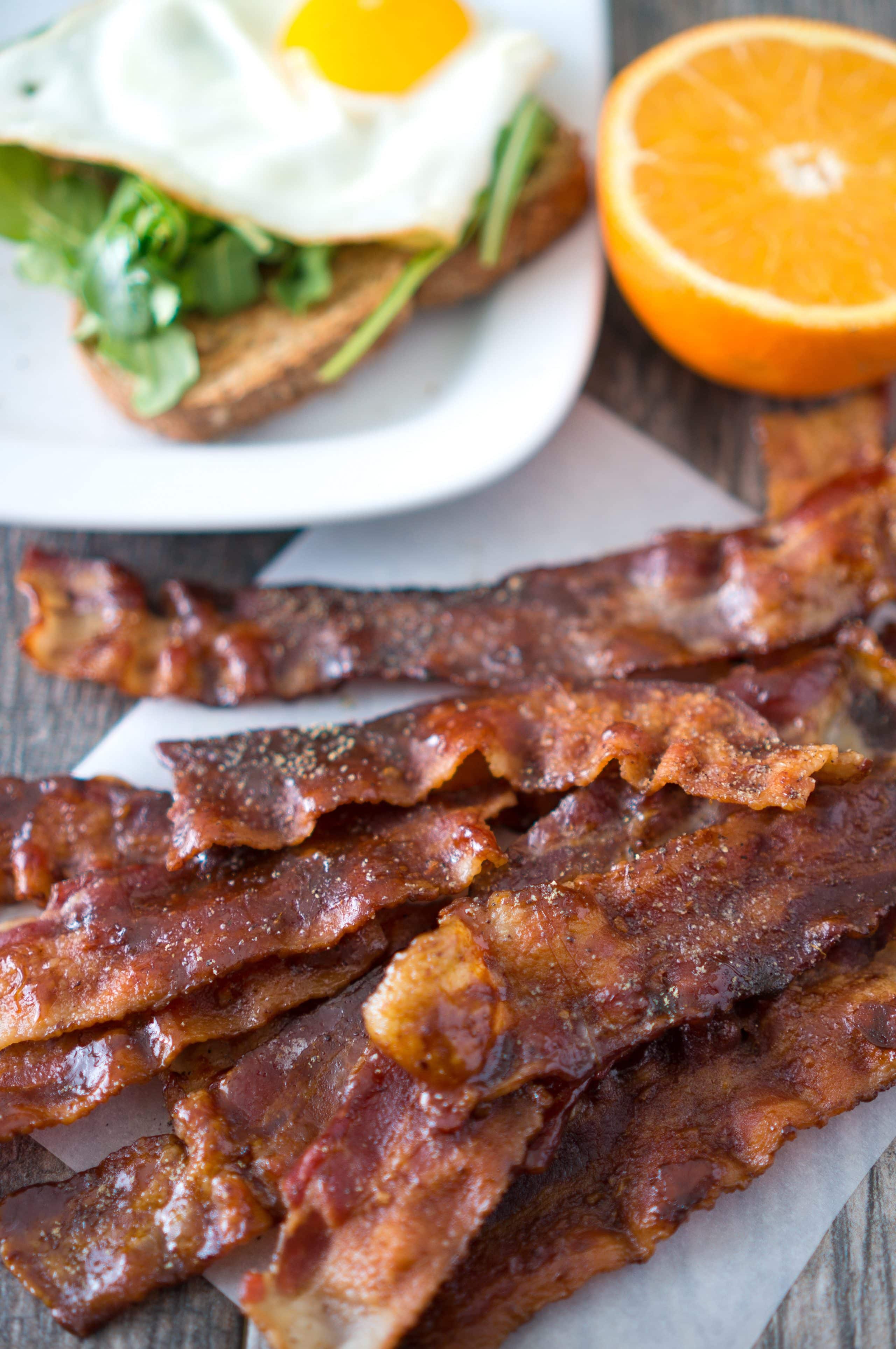 My poor legs are still screeching at me as I sit here and type this. They would be content if I just lay motionless on the floor for another week or two and never spoke of exercise, ever again. It had it all. Miles of steep inclines, rocky sections, mud, slick ice, sand, deep snow, twists, turns, switchbacks. And every labored step got us closer to one of the most stunning views of the park my eyes have ever seen.

We played a super fun (and sort of terrifying) game on the way back down where we tried to prevent falling and injuring ourselves on the icy patches of the trail. We would squat down until our backsides were hovering just above the ground and use our arms to push us down the steep sections. All in the hopes of transforming ourselves into compact human-sleds down an outdoor ice luge, trying desperately to avoid the inevitable face plant or two. I imagine we looked a little like snow-dwelling orangutans with coats.

If I had to put a number on it, I would say this technique was about 70% successful and 30% pure ridiculousness. There were a few times where we had to laugh off some of our sketchier landings just to avoid acknowledging “YIKES, that was a close one”. And by "yikes" I mean - insert any other fear-produced expletive here.

Needless to say, some congratulatory bacon cheeseburgers were devoured after that. Because there are moments when bacon is the only consolation.

But even if you aren’t recovering from an outdoor adventure, maybe you had sort of a rough week at the office. Or maybe you’ve had a totally UH-MAZING week and are just in that “treat yo’ self” mode.

Times like that call for bacon. But not just any bacon. The glossy, gleaming candy-coated kind. Gloriously glazed with a hint of spice. 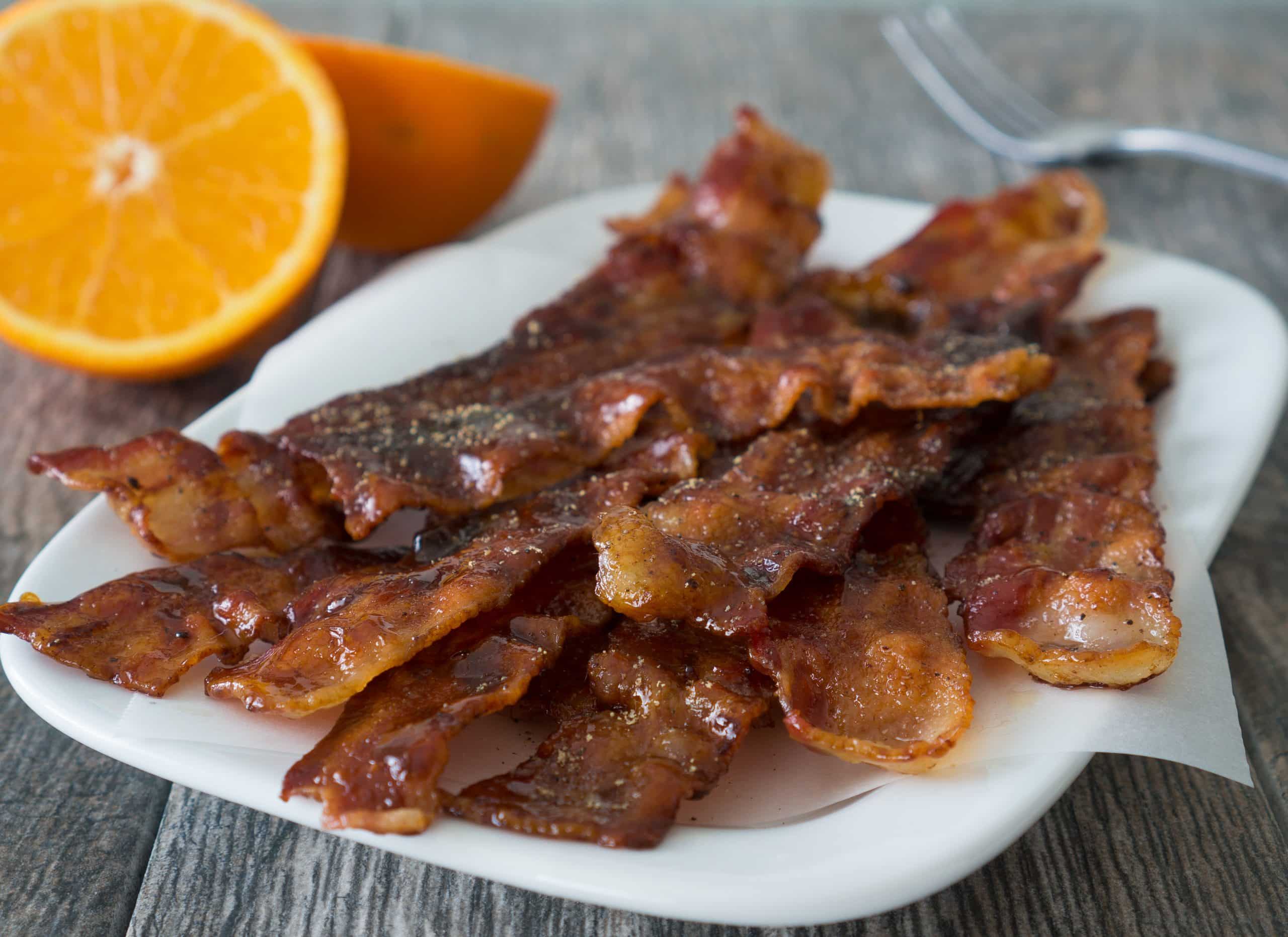 A little note about the recipe before you dive into it.

Must. Have. CRISPY. Bacon.

I know that some people like their bacon on the chewier side. By now you know that I am a devout supporter of the “to each their own” mantra. But today I have to take a firm stand with the crispy side.

To achieve that crunchy, sticky candy-coating you need to start with a nicely crisped canvas. Otherwise, you could end up with some flimsy, gummy bacon where the sweet spice mixture refuses to stick. Leaving you with a sad gloppy pan of limp bacon noodles. And nobody wants that.

Periodically removing the rendered fat (liquid) from the pan as it cooks will help crisp the bacon more evenly and quickly. All you have to do is tilt the pan a little and take spoonfuls of the liquid out when you see it building up. You’ll also be removing some of the fat content itself from your end result. So it’s a win, win.

Setting out a platter stacked high with a few batches of these bad boys will make you a total brunch-hosting hero. These heaven-sent, savory-meets-sweet slices take bacon to a whole new level of indulgence.

Super simple but totally impressive, this is elevated brunch fare that you can make stove-top in your jammies. And you can do it using just one pan.

Many candied bacon recipes call for preheating the oven, laying out a lined baking sheet that is then stacked with a wire rack on top, laying out the bacon, sprinkling with sugar and spices, and then baking for upwards of 45 minutes.

These recipes (while undeniably delicious) don’t always accommodate my need for food in a “right NOW” kind of way. When it comes to bacon, my inner brat (Veruca Salt) comes out to play.

There’s a time for those slow cooking techniques, and then there’s the time for rewarding yourself with a bit of well-deserved instant gratification.

A word to the wise. Despite the deep love you may have for friends and family members, some mildly possessive need to have ALL THE BACON may overcome you. So if, like me, your kitchen is blocked off from view by the rest of the house then I highly recommend that you adopt a “one for you, two for me” policy and sneakily set aside a plate for your awesome self.

It’ll be our little secret. 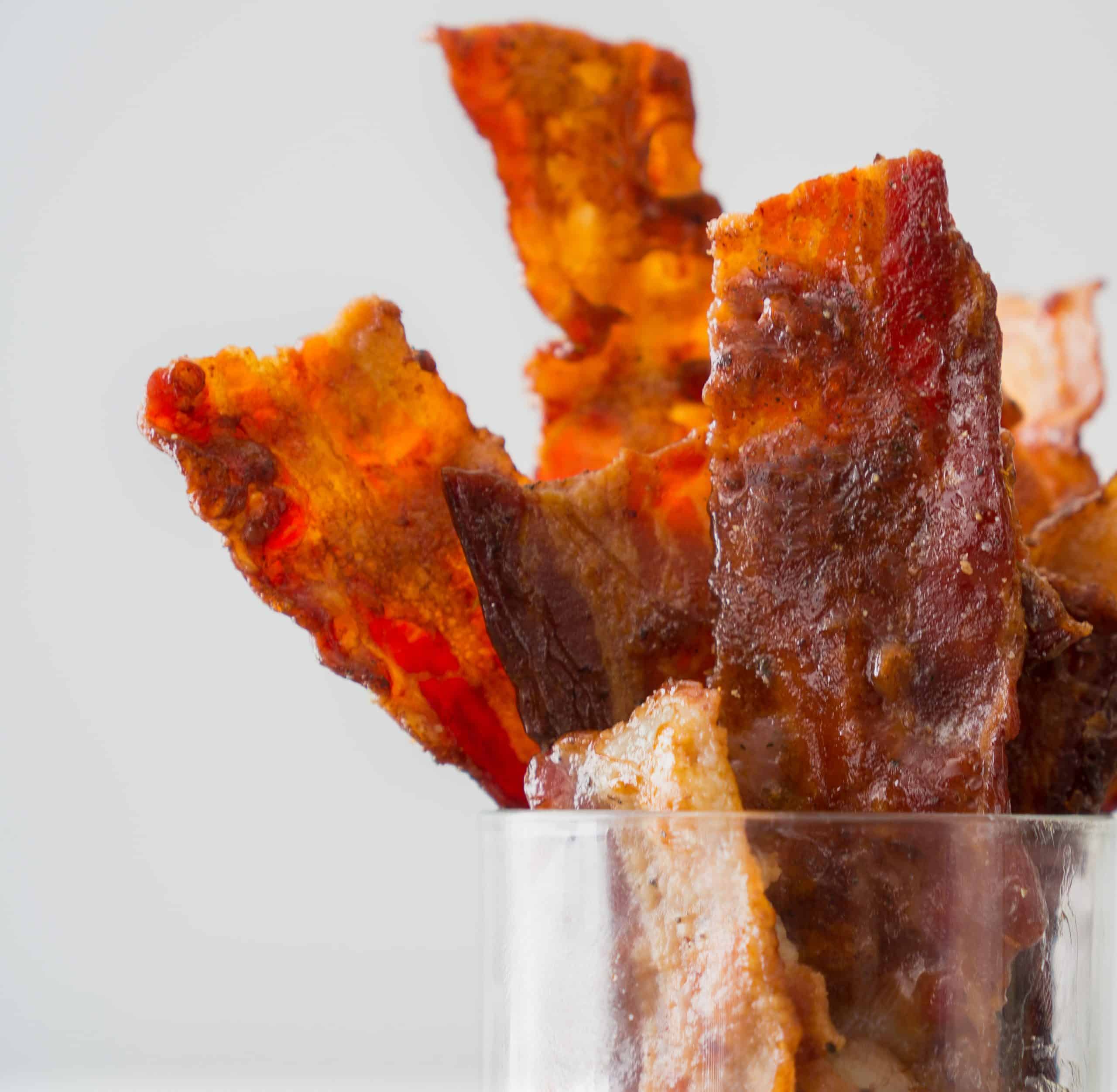 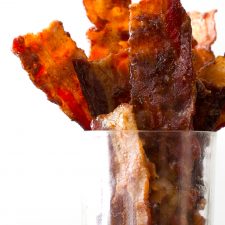 * You do not have to grease the pan before adding the bacon. The bacon fat will render off and you won’t need any additional oil or fat. ** Since we are candy-coating these, crispier is better in this instance. You want to crisp the bacon and try not to leave any super chewy large fatty pockets.